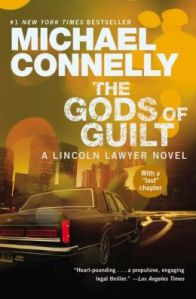 This past Christmas, I asked for the new Michael Connelly novel, “The Gods of Guilt,” and because she’s awesome, my mother bought it for me. I started reading it immediately. Well, I mean, like, not right after I opened it because that would be rude to blow off the family celebration (even though I totally considered it).

Fast forward three months. The book quickly went from being the first thing I picked up when I had free time, to being put in the basket under the console of my minivan and only coming out when I waited in the pickup lane at school. Ooooh, that’s a bad sign. That’s basically basket purgatory for a book.

I finally finished it this week and now I have just one question: Michael Connelly, where did your mojo go, son?

Book jacket: Michael Connelly is the author of twenty five previous novels. Maybe this is part of the problem.

In 2013, I fell in love with MC’s most popular character, Michael (Mickey) Haller, when I picked up the audio book, “The Lincoln Lawyer.” Knowing Matthew McConaughey had played the lead character in a movie based on the book a few years earlier solidified my choice. Now I could definitely put a face to Connelly’s rugged and charming attorney.

McConaughey may be a naked bongo-playing hippy who is pretty full of himself most of the time but I enjoy him, especially his latest turn in HBO’s True Detective. YOU GUYS, how intense was that series?

Sorry, back to the book.

In Gods of Guilt, Mickey Haller is back in the court room trying to save his client, who also happens to be the pimp of a woman Haller has a long history with. If you’ve read every book in the Lincoln Lawyer series (*raises hand*) then you know about their past. If not, the author catches you up pretty quickly.

Many beloved characters are still helping Mickey run the firm so it was nice to read about them them, but unfortunately, the bad guys aren’t interesting, the story is long-winded and the court room scenes (which are usually my favorite part of Connelly’s books) don’t pack the same punch that they have in the past.

I’m always riveted by an MC novel but with this one, there were no rivets. I was rivet-less. Sans rivets.

In the book, Haller is estranged from his wife and daughter and seems detached from the firm, as well as life in general. Maybe this is a case of Michael Connelly being detached from the series. Maybe he signed up for another book to make his publisher happy but when it was time to write it, he stomped around his multi-million dollar mansion (I’m assuming) because his heart wasn’t in it.

Maybe it’s time to let Mickey drive his Lincoln off into the sunset and start a new series. With a fresh character to rough up, maybe Connelly’s imagination will be sparked once again.

In the meantime, I’d definitely sit through another Lincoln Lawyer movie, though after that Oscar win this year, McConaughey’s asking price has probably gone up a bit.